Welcome to the discussion forum! This is a place where players can discuss any and all things related to Pocket Knights 2.

1. chaos battlefield is more PvE than PvP. Hitting enemy player is almost impossible due to "free targeting" while character most of the time focuses on mobs instead of players from enemy faction.
solutions:
- let players focus enemy players easily with button or by tapping on enemy so hits can actually land on them,
- attacks (or taking damage) should stop players from gatheting crystals or "delay" from gathering,
- carrying supply should reduce movement speed greatly so it is actually possible to catch them

3. more shops should be refreshable with refresh scrolls

4. there should be option to invite players into guild

5. there should be possibility to "reply (whisper)" to person when in instanced zone (instead of typing in their name)

6. lv2 star upgrade stones in shop anyone? we currently have lv1 and lv3 OR make stones combinable in case one have too many lower level stones and no use for them

8. there should be option to set "displayed" title on top of "stats" title (so players can match their fancy titles with good effects from other titles).

9. there could be screen guide on different scenes to show/describe to player what he can do in certain situation, for example: while in mystic tower, guide would tell user that they can collect hero gear materials in there or that there are rewards claimable in "points" tab of arena.

10. there could be ingame tip telling player on what level he can join guild (very frequently asked).

11. factions in chaos battlefield should be shuffled from time to time. looking at server 1.odin right now, almost all active players are in one faction while inactive guilds/players are in other (demon) faction, making it literally impossible to ever win in chaos battlefield by points (when cycle ends, it is most of the time 20 times more resource points on one side)

1. titles for challanges such as "top1 hunter" for trial last 168 hours (7 days) but if player changes title after 24 hours, they won't be able to reenable this title anymore even though it's still available in their list with active timers. 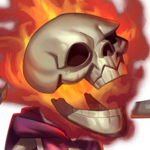 Thank you so much for your valuable feedback. And your feedback has been sent to the support team.